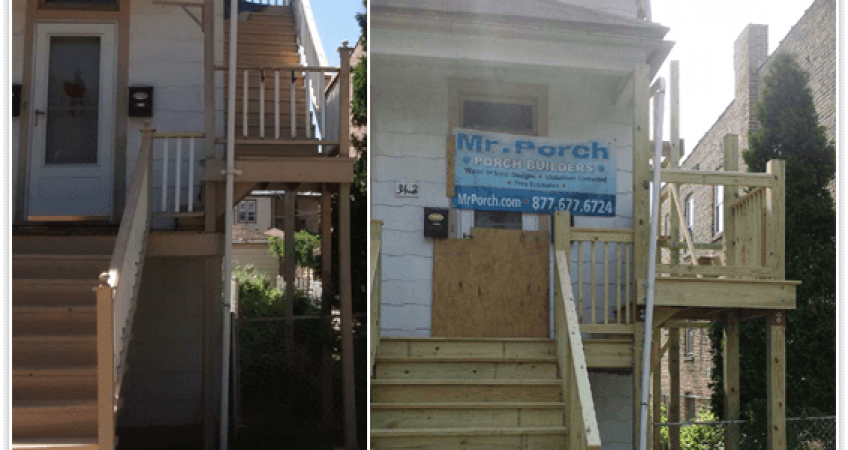 Posted by mrporch In Blog

“Thank you for your service.” It’s an often-used phrase; but sometimes when people utter the words so promptly after meeting a veteran, it can almost sound like a meaningless afterthought. But when Frank Knight, CEO and founder of Mr. Porch, recently thanked a veteran for his service, he really meant it.

A new porch may sound like a luxury or even inconsequential to some, but as many Chicagoans know: it’s not.

Chicago’s Recent Porch History
A little over a decade after the most infamous porch collapse in American history, in which 13 people died and more than 50 were injured in Chicago’s Lincoln Park neighborhood, the consequences still reverberate. The heightened awareness of the importance of porch safety has undoubtedly saved lives and avoided untold catastrophes – but in the process, it has created numerous violations notices and financial challenges for many residents and landlords.

Navy Veteran Meets the Right Porch Builder
James Budzisz, 67, a Navy veteran who was recently diagnosed with terminal lung cancer, discovered his “porch pain” when someone in his neighborhood called the city of Chicago to complain about the front porch leading to his home and to the apartment upstairs.

The city of Chicago ordered Budzisz to get his porch fixed. Budzisz, a retired printer who lives off Social Security and does not have a pension or a rent-paying tenant, quickly realized that the cost of replacing or repairing his porch was far out of reach.

“I called around for estimates,” Budzisz says. One of those estimates came from Frank Knight, owner of Mr. Porch – one of Chicago’s largest porch-building companies. Knight estimates that he and his crew of five full-time employees and nine subcontractors have built or repaired more than 1,500 porches since opening in 2008.

“He said 80 percent of the porch would have to be replaced to comply with city codes,” Budzisz says of Knight’s recommendations. “He explained that if you’re going to replace 80 percent of a porch, you’re better off doing 100 percent – including all new concrete footings and piers.”

It would cost around $4,000 to fix, Knight told Budzisz. The problem? Budzisz didn’t have four thousand lying around – and Knight frankly didn’t think it was worth fixing. And, $4,000 was the lowest he could imagine anyone spending to bring the porch up to code. Making problems more expensive for Budzisz than some typical homeowners – this was no conventional porch but a two-level porch with stairs connecting the first platform to the platform on the second story of the building. It was more realistic, Knight believed, that the porch would have to be replaced, which would cost much more than $4,000, but be worth it in the long run.

The porch itself, Knight says, wasn’t on the verge of collapse. “I didn’t feel the porch was unsafe, but it was definitely out of compliance,” Knight says, citing the absence of lag bolts and joist hangers and undersized steps, among other things.

Knight, who spent some time speaking with Budzisz and learning of his cancer and Navy service while conducting the site visit, couldn’t help but like the guy.

And when they parted ways, Knight also knew he wouldn’t be hearing from Budzisz.

“I could tell he didn’t have the money. But that didn’t change the fact that he needed to replace his porch or would be in hot water with the city,” Knight explains.

That evening, Knight kept thinking about the Navy veteran and feeling sick at the idea that whatever time Budzisz had left, too much of it was going to be spent worrying about how to finance a new porch. Knight wanted to show his appreciation and give something back to someone who had given much of himself.

Frank Knight’s Own Struggles
Knight understood Budzisz’s financial struggles all too well. He grew up in a household run by a single mother; and as an adult, he struggled, too. “I was a kid that knew and learned from the streets; no one held my hand,” Knight explained. “Early on I came to understand that I was responsible for my own success. There were no short cuts, just hard work.” Knight had his share of challenges as an adult, too – from starting his business to getting into a bad mortgage with his first house. “Struggle is sometimes the best teacher,” Knight added.

Knight to the Rescue
Experience with his own struggles may be why Knight has a soft spot for people in trouble. In fact, he often goes to court with his customers – free of charge, if they’ve received violations requiring a court hearing. He knows how frightening the experience can be – especially for someone (most everyone, in fact) unfamiliar with the building codes, court process and how to rectify the situation.

“When someone gets a violations notice, their imagination can’t help but spew out the worst-case scenario questions,” Knight explains. “‘Will I be fined until the end of time if I can’t get my porch fixed? Will I be arrested? Could I lose my house?’ These are all things that go through our customers’ minds. We’re glad to explain the whole process, go to court with them, and put them at ease.”

After thinking about Budzisz’s situation of how he had fought for his country and was now fighting a losing battle with both cancer and city hall, Knight decided to do something he had never done.

Knight called and enlisted the support of the owners of the two local companies he works with – Taurus Supply Inc., out of Downers Grove, and Totem Lumber & Supply, out of Schiller Park.

“I told them we’ve got a veteran who needs a porch, and he’s not in the best shape. They were on board right away. They’re amazing partners!” Knight says.

Taurus Supply would provide the hardware, like the joist hangers, lag bolts and collated nails; Totem Lumber would supply the lumber; and Mr. Porch would supply the labor, time, architectural drawings, expertise, and the cost of permits and fees. Speaking of his decision to help Budzisz, Knight explained: “I thought it would be good to give a little something back. Obviously, the city of Chicago and its residents have given us a lot.”

Budzisz was stunned by the offer — and slightly suspicious. But he says, “I checked up on his work, and he had outstanding references, and the city said he’s very good, and the Better Business Bureau said that I couldn’t go wrong with somebody like Mr. Knight. Then I also went on the web, took a look at his work and was just fascinated by what I saw.”

And Budzisz realized this was a genuine offer and that his porch would be in good hands.

Mr. Porch Born from Tough City Codes
Arguably, Knight likely wouldn’t have started Mr. Porch if it weren’t for Chicago, which has aggressively gone after the weakening porch problem since 2003, after the Lincoln Park porch collapse.

The 2003 porch disaster led to a lot of reflection and changes in how Chicago manages the city’s porches, which, as a general rule, have not withstood the test of time well. With the new, much stricter porch construction codes, came a wave of violations and need for porch repairs and/or replacements.

Knight saw the need for his services and has long recognized that the community commitment to porch safety has allowed Mr. Porch to flourish. The company had gross sales of $3 million in 2013. Now in a new home in Mt. Prospect, Knight finally feels as if he is living the American dream.

Proud Steps Begins
After meeting Budzisz and recognizing that people like him are the reason he is able to live the American dream, Knight decided to start Proud Steps – a program designed to identity and select one veteran in need of a free porch each year. Knight will draw up the blueprints, send over his employees and, with the help of his suppliers, build and provide everything – for free.

“We’re still working out the details of the program, but we’re committed to helping one Vet a year,” Knight explains. It may not be a way to thank every deserving veteran, but at least every year Knight will be able to build a Mr. Porch for a veteran who needs Proud Steps.